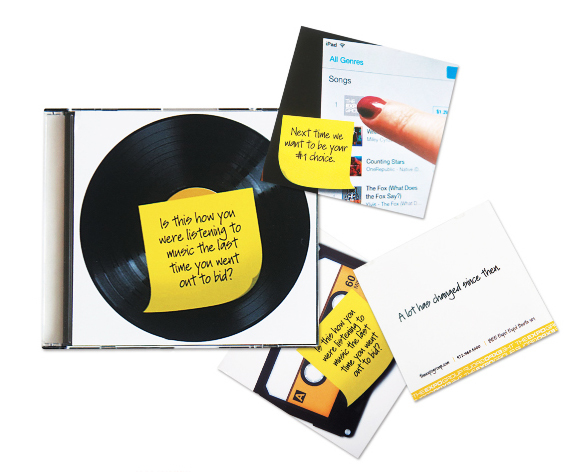 Last month, The Expo Group was featured in an article from Exhibitor Magazine showcasing the direct mail component of our award-winning marketing campaign to exhibit at last year’s IAEE’s Expo! Expo!

As part of our overall marketing campaign, we included a package designed to grab the attention of show managers who hadn’t changed general contractors for a while.

The mailer included a CD case with a custom cover that showed either a record, a cassette or CD based on the last time the potential client had changed contractors.  Each cover had a yellow “post-it” note asking “Is this how you were listening to music the last time you went out to bid?”

On the inside, there was a real $10 iTunes gift card and a note that stated, “A lot has changed since then.”

For shows that had just recently changed, the cover showed a finger touching an iPad screen pointing to the top 10 on iTunes with a note that said,”Next time, we want to be your number 1″ along with the $10 gift card.

The result? A great conversation starter for our sales team to follow up with and twice the amount of booth traffic compared to the year before.   Also, almost half of the direct mail recipients stopped by our exhibit and 10% of those submitted an RFP.

Here’s a link to the article on Exhibitor Magazine.