Loving What We Do – Celeb Sighting Part Deux

Loving What We Do – Celeb Sighting Part Deux

We love trade shows. We love events. Most of all we love helping people come together to connect, learn, conduct business, get inspired and have some fun.

Speaking of fun, the response we received from last month’s question was amazing and so we wanted to share a few brushes with celebrities.  Please share your own experience in the comments below.

Who’s the most famous person you’ve met thanks to a trade show or event? 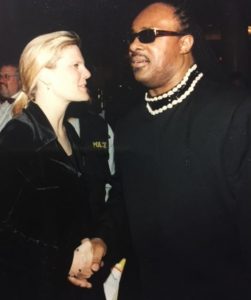 I’ve met so many amazing people – some mainstream famous, like Stevie Wonder and several Presidents, but many are famous in their field and are especially mind-blowing – a Nobel prize winning scientist, a social changemaker, a creative talent. (I’m admittedly still holding out for Oprah…)

One of the groups I booked when I worked at the Hyatt Waikiloa was Tony Robbins. He was great to work with, and he had me go through his entire program. I even did his fire walk and his leap of faith

I had to put a mic on Malala Yousafzai because the male audio guys couldn’t touch her. It was moving to realize how slight she was, yet so powerful. Some of my other favorite meetings have been Glenn Frey and Joe Walsh (the Eagles), Jay Leno, the Doobie Brothers, Brian Setzer, former First Lady and Secretary of State Hillary Clinton, Danny Glover, Rachel Maddow, Olympians Jesse Owens and Michael Johnson, Rahm Emanuel and FBI Director James Comey. Plus, while backstage at events I was producing, writing or designing I’ve seen Presidents Obama, George W. Bush and Bill Clinton, all surrounded by security detail. 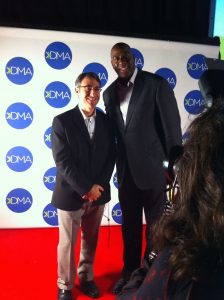 I spend most my time in the office so don’t get to the shows often… So I have to say Santa Clause at our annual Christmas parties!

What’s your famous person meeting story? Let us know below.