Loving What We Do – Celeb Sighting

Loving What We Do – Celeb Sighting

We love trade shows. We love events. Most of all we love helping people come together to connect, learn, conduct business, get inspired and have some fun.

We’ve had some fun with this article series, and learned more about our team and about you – just answer the question posed each month in the Comments Box below to share your own experience.

One of the reasons we love what we do is the variety of experiences, so our question this month:

Who’s the most famous person you’ve met thanks to a trade show or event? 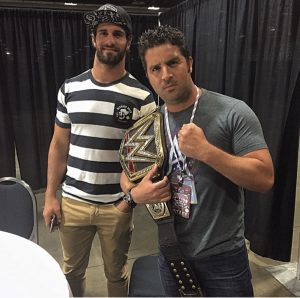 Oh man don’t test me with my famous encounters.   I think I’ve met more famous people that anyone I know. Stevie Wonder, Will Smith and Vince Vaughn are probably the top three most famous people I’ve met on the show floor or walking around the convention center. Here’s a great picture from a comic book show I was working though, with Seth Rollins. He was the current WWE champion at the time and let me hold the belt and take a pic.

Reggie Jackson. Met him at The Super Show in Orlando quite a few years ago. He was walking down the aisle towards me & stopped me & said Hey Joe, how’s it going?!?!? LOL, OK, the 2nd part is a lie…I stopped him & introduced myself to him, as if he would remember me if we met later, & he talked to me for a few minutes. I was surprised that he wasn’t bigger but was pretty cool!

Well, I used to work for a professional baseball player so my fabulous encounters skew that way: Eddie Murray, Kirby Puckett, David Justice…and Halle Berry when she was married to him – had dinner with them. I once had to turn down NPR’s Bob Edwards because my player didn’t want to have a regular on-air check in with him (dumb move!). I also had a few phone calls helping Chris Wallace refine his pitch so that my player would agree to an on-camera interview that involved his home and family. Oh and Barbara Walters and Holly Robinson Peet and David Robinson and Becky Calder, who was the first female Top Gun – she was amazing and so humble and fun. She had a bit of stage fright before going on – I assured her that if she could survive combat and air maneuvers, public speaking was a piece of cake. 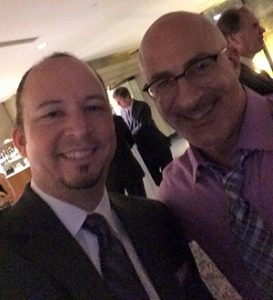 We were producing an awards show and Jim Cantore from the Weather Channel was the host for the event.  Since I was the producer and stand-in, I was able to walk through the rehearsal with him and he played along great with our weather puns in the intro.  Really good guy and a charismatic personality (as you might expect).

Apparently we are heavily titled to sports figures here at The Expo Group. What’s your famous person meeting story?