The Expo Group said goodbye to a long-time employee and good friend last week as Neil Carpenter was laid to rest.  Known for his sense of humor and dedication to making tough, long-lasting structures through his expert welding techniques, Neil is fondly remembered as an outstanding storyteller with a unique background as a musician and Hollywood stuntman. 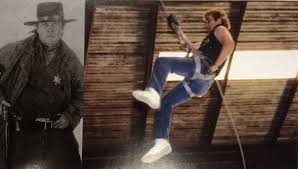 Growing up in California, Neil was exposed to Hollywood from the start with a mother and a grandmother in show business.  Wanting to see the world, he joined the Army and served in the Airborne Infantry from 1964-1976.  After spending time in Hawaii recovering from a shooting injury in the hip, Neil moved to Santa Monica and got involved with Hollywood’s Stuntman Association.  He continued to do stunt work for about 20 years while at the same time becoming certified in all forms of welding as a backup. His welding work includes such varied products as the roller coaster at Six Flags Magic Mountain as well as the Blackbird Strategic Reconnaissance aircraft.

That welding expertise served him well when he joined The Expo Group in the late 1990s. He built the metal shop in our warehouse and remained committed to improving structural designs and creating useful items meant to last.

Always learning, Neil had many talents and enjoyed painting, designing, singing and writing music. He was proud of his service to our country and to his fellow employees at The Expo Group, where he ran the metal shop for more than twenty years.

We celebrate his life and mourn his passing.