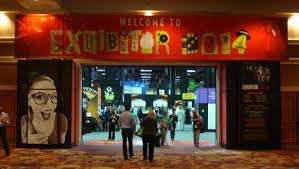 Predicting what’s hot and what’s not when it comes to design in the event industry is best left up to the experts. That’s why we sent Jason Rahn to Las Vegas to visit Exhibitor 2014 and GlobalShop; he’s our lead graphics designer and editor of our quarterly digimag devoted to trends, The Resourcer.

The Exposure: So Jason, what did you see as the biggest trend on the floor?

JR:  Actually it was more of what I didn’t see, and that’s metal. Several designs incorporated fabric or other materials to hide that metal and create curves.   Also, I think more designers are considering all the senses, not just sight, as a draw. This idea is something that’s been ramping up and talking about for at least a year, and was finally more prevalent at Exhibitor and GlobalShop this year.

The Exposure: What else did you see that caught your interest?

JR:  Definitely more non-static imagery.  Lots of folks are incorporating digital signage as a natural extension of their designs with the ability to offer hands-on interaction. Also, 3D and virtual reality-type experiences are starting to become more common as Google Glass and the Oculus Rift visor become more mainstream.

The Exposure: Was there a dominant color? Is this the year of red?

JR:  Lots of bright primary colors but nothing dominant.  I did see and appreciate the exhibits that coordinate their flooring color with their exhibit. There were some great examples of booths that used matching custom carpet cutouts to create an inviting space.  Flooring doesn’t have to be an afterthought.  Make it part of your branding efforts.

The Exposure: Any surprises? 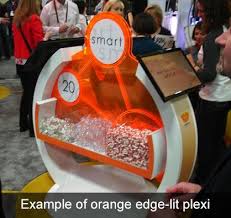 JR:  I didn’t expect to see so much edge-lit plexi since it has been around a while.  We’ve used it for some great special effects in small doses, a little visual surprise for attendees, if you will, but several companies had loaded up on it. We had heard edge-lit plexi was in short supply and now we know why! Also there was a self-contained waterfall in one exhibit that was quite striking.  Again, the use of both sound and sight to draw in the attendee and of course, a natural fit for any exhibiting company that works with water in any capacity.

The Exposure: What else?

JR:  As usual for Exhibitor, there were quite a few exhibit design houses that constructed an enclosed private area or bar as opposed to having an open-for-everyone design. Flooring and even a canopy is often used to make the separation as well. Think private club vs. open party.  This type of fortress exhibit can be perfect at the right time for the right company with the right messaging. Also, as you can imagine, iPad stands were dominant this year. It seems a simple pad on a stick will no longer cut it. I think we’ll see more and more branded housing around the stand to really, pardon the pun, “stand” out.

The Exposure: What can you share with us from Global Shop? 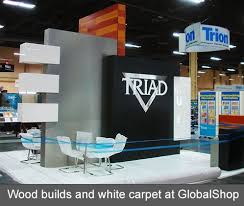 JR:  You never know where ideas may come from, and it is a great opportunity to have GlobalShop at the Mandalay Bay with Exhibitor Show in town. The retail world can provide a huge source of inspiration.  Obviously, hardly any modular systems were seen at Global Shop.  Almost all booths were custom-construction builds with wood, either faux or real, and stretched fabric as the big players. And white carpet.  Lots and lots of white carpet to show off the fixtures.

JR:  Luckily, we have folks in our carpet department who know how to deal with that.