History was made last week at the Kay Bailey Hutchison Convention Center when, for the first time ever in Dallas, trade show floor markings were created entirely by robot.  Meet Lionel, the autonomous floor marker from August Robotics. 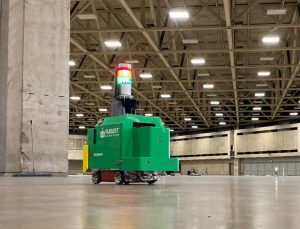 The Expo Group team worked with August Robotics to test out Lionel as we prepared for move-in of the Society of Military Engineers Small Business Conference. Fed a powerful diet of accurate CAD floor plans, Lionel is able to mark off the floor precisely, directed from a laser-guided base station. As Lionel traveled across the floor, marking with water-soluble paint, The Expo Group and August Robotics teams assessed the end result and gathered information for improvements.

Future plans for the robot marker include providing intermittent lines rather than just booth corners, adding booth numbers and making electrical markings. The cost savings of reduced personnel for low-skill jobs like floor markings could have a big effect on trade shows. Our team is happy to be at the cutting edge of trade show technology with the help of our little green robot friend.